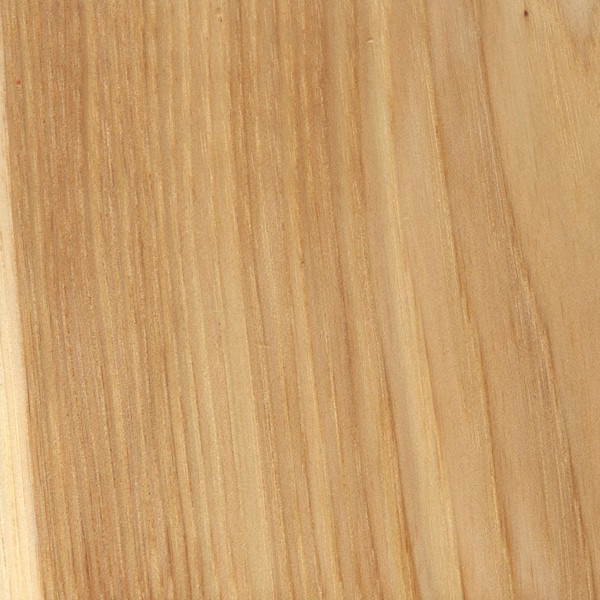 The famous Impact grade A Hickory is known for lower weight and high impact strength. Great wood for Bokken

Heartwood tends to be light to medium brown, with a reddish hue; sapwood is a paler yellowish brown.

Grain is usually straight, though occasionally wavy, with a medium texture. Pores are medium-sized and open.

Considered to be non-durable to perishable regarding heartwood decay, and also very susceptible to insect attack.

There have been no adverse health effects associated with Mockernut Hickory.

Various species of Hickory and Pecan (Carya genus) are typically mixed together and simply sold as Hickory. Prices are usually in the low to mid range, depending upon local availability. Hickory prices should compare similarly to other utility hardwoods such as Red Oak or Soft Maple.

Hickory is among the hardest and strongest of woods native to the United States. On average, Hickory is denser, stiffer, and harder than either White Oak or Hard Maple. The wood is commonly used where strength or shock-resistance is important, such as tool handles, ladder rungs, wheel spokes, flooring, etc. Mockernut Hickory falls into the True-Hickory grouping, and is considered to be a ring-porous wood. The strength characteristics of Hickory are influenced considerably by the spacing of its growth rings. In general, wood from faster-growing trees, with wider spaced growth rings, tends to be harder, heavier, and stronger than wood from slower-growing trees that have rings which are closer together. In addition to strength and hardness applications, the wood of Carya species also has a very high thermal energy content when burned, and is sometimes used as fuelwood for wood stoves. Additionally, Hickory is also used as charcoal in cooking meat, with the smoke imparting additional fla