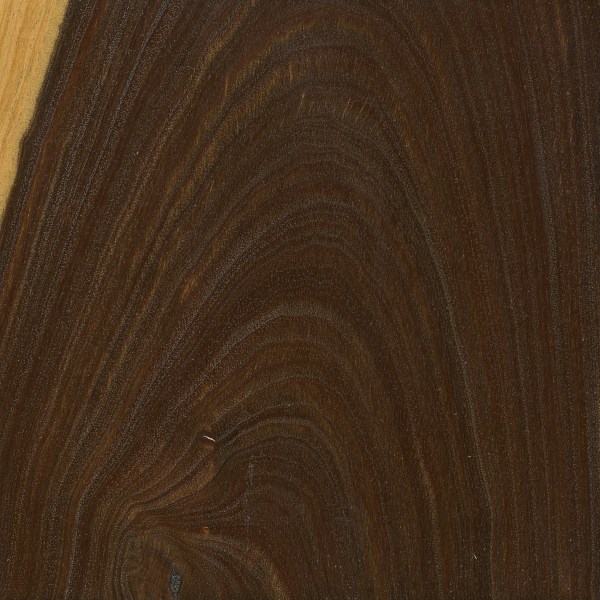 The best wood in our opinion for bokken. It is the densest wood in the world and is great for training.

Heartwood color can range from a pale yellowish olive, to a deeper forest green or dark brown to almost black. Grain has a unique feathered pattern when viewed up close. The color tends to darken with age, especially upon exposure to light. Color of genuine Lignum Vitae tends to be darker than that of Argentine Lignum Vitae.

Lignum Vitae has a fine texture and closed pores. Bare wood can be polished to a fine luster due to its high natural oil content. The grain tends to be interlocked and tight.

Lignum Vitae is reported to be very durable for outdoor use and is also very resistant to insect attack.

Lignum Vitae has a distinct, perfume-like fragrance that lingers even after it has been machined.

Lignum Vitae has been reported to cause skin irritation.

Trade of Lignum Vitae is restricted in CITES Appendix II, and prices for genuine Lignum Vitae are accordingly very high: and usually from questionable sources. Lignum Vitae is typically sold by the pound, (instead of the more common board-foot measurement), and since it is the heaviest wood in the world, this also makes it considerably expensive.

Lignum Vitae is regarded by most to be both the heaviest and hardest wood in the world. Its durability in submerged or ground-contact applications is also exceptional. Lignum Vitae has been used for propeller shaft bearings on ships, and its natural oils provide self-lubrication that gives the wood excellent wear resistance. Unfortunately, Lignum Vitae has been exploited to the brink of extinction, and is now an endangered species. Verawood—a related wood species with similar working properties and characteristics—is commonly used as a substitute, and is sometimes called Argentine Lignum Vitae. Yet even this species (Bulnesia sarmientoi) has been included in CITES Appendix III, though it is not as restrictive as Appendix II where Lignum Vitae is found. Though Verawood is in a different Genus than Lignum Vitae, (Bulnesia and Guaiacum, respectively) both genera are biologically classified in the same Family: Zygophyllaceae. Both woods are extremely hard, heavy, oily, and have a feather