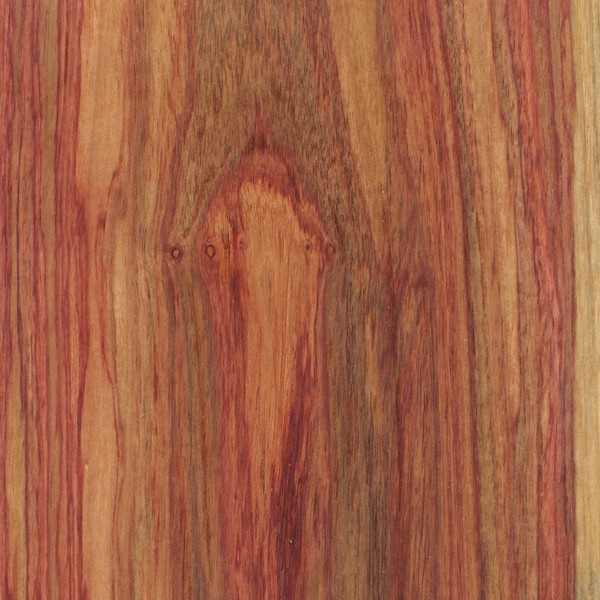 Absolutely beautiful wood. THe pictures do not due it justice. It is very expensive and hard to find. This wood makes a truly unique bokken that will definitely turn heads.

Heartwood is streaked with yellows, reds, oranges, and pinks. Color and figure can be highly variegated.

Pores are open and medium-sized. Grain is usually straight, with a fine texture.

Reported as having a low decay resistance, although it is resistant to insect attack.

Has a mild, fragrant odor when being worked.

Although severe reactions are quite uncommon, rosewood in the Dalgergia genus, (such as Tulipwood), has been reported as a sensitizer. Usually most common reactions simply include eye, skin, and respiratory irritation.

Likely to be very expensive, and seldom available as boards. Tulipwood is most often seen as smaller turning stock, with its cost being on par with other scarce exotics in the Dalbergia genus, such as Kingwood or African Blackwood.

Not to be confused with American Tulipwood, (more commonly referred to as Tulip Poplar or Yellow Poplar), Brazilian Tulipwood is considered a true rosewood in the Dalbergia genus. Tulipwood is a stunningly beautiful hardwood which is in short supply. The tree itself is only found in a narrow geographical area, and it’s small enough to be considered a shrub: typically yielding very small and narrow boards. Because of these limitations, Tulipwood is generally reserved for very small specialty wood items and accent pieces. Some common uses for Tulipwood include: veneer, fine furniture, inlay, marquetry, musical instruments (percussion), and small turned objects.